God is not one to say, “Wait until you are older. Then do great things with Me.”

His “compliment” came on a Sunday morning as I was making my way through a crowded hallway. Our elder team had just guided the congregation through a pastoral transition. And, amid those circumstances, my leadership had had a positive impact on him. “Cor,” he smiled, “you’re, like, really a pastor now.”

I didn’t know how to respond. He meant it as a compliment, but it was hard to hear it as such. Why? By this point, I had been fulfilling the role of pastor for a year and a half. But only now had he come to acknowledge that fact, after watching me walk through that difficult situation.

Sadly, I knew the reason for his earlier reluctance: I was simply too young, at least for his taste. At the time of the compliment I was 27 years old (almost 28!). This means I had become a pastor shortly after turning 26. I guess, in his mind, pastors are older.

He’s not alone in such thinking. How many of us have ever made similar judgments without getting to know someone’s heart?

I’m convinced that God uses people, regardless of age, whose hearts are directed toward Him. This is a personal conviction born out of biblical precedence.

The Bible—God’s complete revelation for salvation and His ultimate authority—shares plentiful examples of young people participating, and leading, under His direction. Throughout the Old and New Testaments, God routinely uses young people whose hearts are turned toward Him. These young men and women set the stage for an important teaching from the apostle Paul: What matters most is not age but character that comes from Christ.

The emerging generation in the Old Testament

Samuel was a young boy1 when he entered into Eli’s service. The Lord chose to deliver important news to him: “Behold, I am about to do a thing in Israel at which the two ears of everyone who hears it will tingle.”2 It was not after he was grown but during his growing3 that God verbally communicated with Samuel and “was with him.”4

David, likewise, entered service of the Lord from a young age. Samuel sought the chosen one of the Lord amongst Jesse’s sons. Jesse didn’t think to call the youngest, who was serving in the fields. Samuel clarified, “The Lord sees not as man sees.”5 Whereby others look at height or age (or charisma or career status or years of Bible training), God sees the heart.

A young David was anointed by Samuel and received the Spirit of the Lord. Later, when David was disqualified to fight Goliath because of his youthfulness,6 he made clear that he was old enough to have already killed both lion and bear.7 Youthfulness did not disqualify David from participation in the Lord’s plans.

God utilized the emerging generation throughout the Old Testament. In other examples, Esther was a “beautiful young virgin”8 who ascended to the throne “for such a time as this”9 and aided in the preservation of the Jews from genocide.

Josiah reigned in Judah beginning at age 8, one of the few kings who walked in integrity. Scripture records that at age 16, “he began to seek the God of David his father, and in the twelfth year (at age 20) he began to purge Judah and Jerusalem of the high places, the Asherim, and the carved and the metal images.”10

Jeremiah resisted his prophetic calling, claiming youthfulness. To this, the Lord responded, “Do not say, ‘I am only a youth’; for to all to whom I send you, you shall go, and whatever I command you, you shall speak.”11

Elihu was the rare friend within Job’s company to rightly bite his tongue.12 His wisdom, despite being the youngest of the group, was shown through temperance and a willingness to yield to those who were older—that is, until their counsel was lacking.

Godly youth in the New Testament

At a time when betrothals could happen as early as 12,13 Jewish tradition points to a teenaged Mary as the Lord’s appointed vessel for the Incarnation. Describing her as a virgin implies she is both young and unmarried.14 Despite the absurdity of the angel’s pronouncement, a (likely) young Mary responds, “I am the Lord’s servant”15 with a wisdom and a humility that we traditionally view as “beyond her years.”

Additionally, Jesus chooses the 12 to carry forth His message and start churches. Not much is known about the disciples, including their ages. Yet John’s early behavior shows errors in judgment that fuel our concerns of the emerging generation. John tells one who is casting out demons to stop,16 asks Jesus for a chair of glory17 and summons God’s judgment against a Samaritan village.18 (Just as a quick aside, our young leaders will make mistakes. But will any of them summon heavenly judgment upon another, resulting in a burnt-down fellowship hall? It’s doubtful.)

That guy, and several other youthful men, was part of Jesus’ inner circle. They were responsible for perpetuating the gospel and would later write significant words for the New Testament.

Paul, in writing to his young apprentice, Timothy,19 admonishes him: “Don’t let anyone look down on you because you are young, but set an example for the believers in speech, in conduct, in love, in faith and in purity.”20

John Chrysostom, an early Church father, stated that Paul’s words to Timothy sprang “from a common prejudice.”21 What common prejudice? “Youth is apt to be despised.”22 It was common then, as now, that youth were looked down upon simply because of their age.

To Timothy and another young apprentice, Titus,23 Paul charges them and other “young men”24 to “set an example.”25 He does not say, “Wait until you’re older, and then set an example.”

Wait until you are older?

The clear implication is that something other than age is the litmus test for leadership. What is it? A key prerequisite frequently used by Paul in these three letters is godliness.26 Christ-likeness is needed to lead. It is the character that Christ grows within the leader, regardless of age. It is God’s work, which permits them an opportunity to set an example “in speech, in conduct, in love, in faith, and in purity.”27

Conversely, the absence of godliness in young leaders leads to their downfall. Setting aside well-publicized failures of modern pastors, the Bible is replete with such examples. Eli’s sons, characterized as priests and “young men,” had no regard for the Lord.28 Scripture says it was their refusal to honor God, not their age, which incurred judgment.29

Unfortunately, age is not the cure-all. When a 41-year-old Rehoboam assumed the throne of his father, Solomon, his arrogance (i.e. lack of character) caused him to repudiate the wisdom of his elders.30 Scripture also states that when Solomon (with unmatched wisdom) “was old his wives turned away his heart after other gods, and his heart was not wholly true to the Lord his God.”31

Godliness, which Jesus cultivates from the inside out and which is demonstrated over time through a host of experiences,32 is the thread that binds. Without it, leadership unravels, both young and old.

Nowhere is the importance of God’s inner working clearer than in Acts 4, when Peter and John preached the resurrection of the dead. The response caused such a commotion that both were summoned before the religious leaders to account for their words. Rather than shrink back, they courageously proclaimed Jesus, in His death and resurrection, as the only name by which we must be saved.

Scripture notes the response of the leaders: “When they saw the courage of Peter and John and realized that they were unschooled, ordinary men, they were astonished and they took note that these men had been with Jesus.”33

The most noteworthy trait of the disciples was that they had been with Jesus. What mattered was not their age, lineage, previous shortcomings or lack of rabbinic schooling. It was Christ, who had once been with them and was now in them. That was the defining characteristic.

And it still is.

Not every emerging adult should be in church leadership. Not every youth will glow with godliness. So it’s incumbent upon the church to get to know the next generation. For the church to truly discern which young people have been with Jesus, we will need to spend time with them. Without a doubt, some are ready to do—or are already doing—great things through God.

19 It is safe to assume Timothy is younger. Paul frequently refers to him as his spiritual son (1 Timothy 1:2,18; 2 Timothy 1:2; 2:1). The letter’s contents share wisdom from a mentor to his apprentice. Additionally, Paul speaks of three generations of Timothy’s family. Tradition holds that Lois probably converted to Christianity during Paul’s first missionary trip (Elwell, W. A., & Beitzel, B. J. (1988). In Baker Encyclopedia of the Bible (p. 1346). Grand Rapids, MI: Baker Book House.). This means Paul hadn’t simply heard of the faith of a deceased relative, Lois, through Eunice and Timothy. Instead, Paul had met her. This requires Lois to be an elderly women, which likely means Eunice is middle aged and Timothy is younger. ↩

23 It is safe to assume Titus, like Timothy, is younger. This is seen in the book’s contents where Paul, an elder in the faith, passes down wisdom to his younger apprentice (1:4). It is also observed in Paul’s comment to once again “not let anyone despise you” (Titus 2:15), which mirrors the language to Timothy. ↩

Cor Chmieleski is senior associate pastor with Hope Community Church in Minneapolis, Minnesota. At age 38, he is not in the pool called the “emerging generation,” but he swims in those waters often at his church, where the average age is 26. He also directs the Leadership Development Institute, a nonformal, church-based internship aiming to raise up a bunch of young punks the next generation of Christian leaders, pastors and church planters. 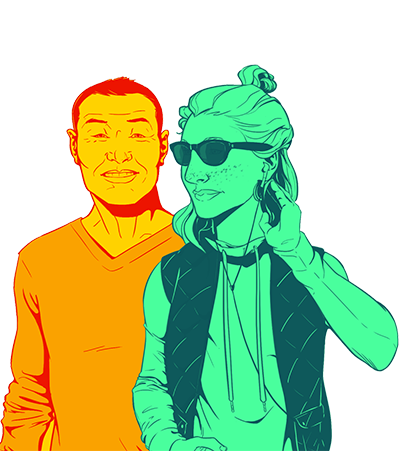