A Grateful Schoolteacher and a Bricklayer

Recognizing God’s goodness as an orphan

I In the Democratic Republic of Congo, most children spend an average of only eight years in school1. And since every child must pay for schooling, orphans rarely have the opportunity to attend at all.

Anzolo Loraine and Gonza Bwanu are Congolese youth who have each lost both parents. Yet instead of the lonely existence of the orphan, they have thrived, due in part to the role of GlobalFingerprints in their villages.

Loraine, now around 22 years old, began sponsorship in 2007, right after GlobalFingerprints was launched in her country. Her parents had died within a short time of each other when she was only 13. She had just begun high school but wasn’t able to continue. She moved in with an aunt and uncle who had their own children and thus could not afford to school Loraine as well. 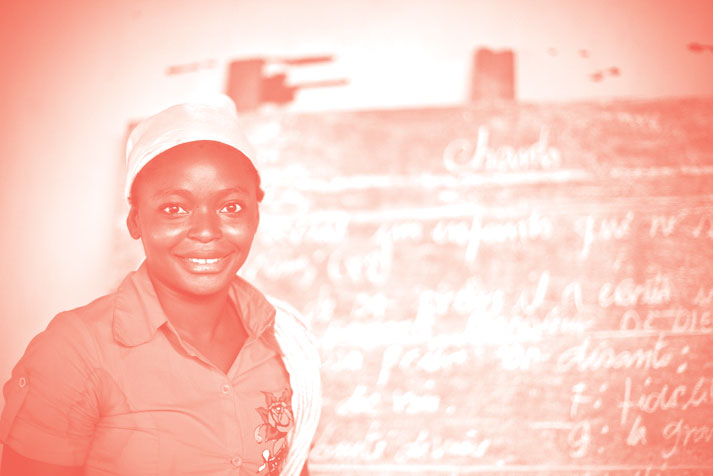 As an orphan in a remote village in northwest Congo, Loraine worked hard to contribute to her new family—carrying water and firewood, preparing meals, and helping care for the younger children. Although she loved school, she had to leave that dream behind.

Then GlobalFingerprints became active in her village when she was 14, and they registered her to be sponsored. She was thrilled to be able to attend school again. Through GlobalFingerprints, not only were her school fees paid, but she also received a uniform, red backpack, and notebooks and pens.

Loraine’s sponsors are Dave and Ann Ashby, who live in Iowa. She calls them “my very dear parents in the Lord” and prays often for both her sponsors and her guardians. “My aunt and uncle take very good care of me,” she adds. “They want me to have success. They always pray for me.”

Loraine became involved in her aunt and uncle’s church and was soon baptized. “Pray that God would give me the desire to serve Him with my life,” she says. “I pray that every day.”

After graduating high school in 2011, Loraine passed the national exams and received her diploma. She then started teaching in the elementary school in her village. With her salary of about $50 a month, she decided to sponsor an orphan like herself, in hopes that this young girl would also see how she belongs to God’s family.

Gonza is 22 years old and has been an orphan since age 10. After both his parents died, he and his two younger brothers moved in with an uncle who neither nurtured them nor seemed to care for them, but at least they had each other. Gonza dropped out of school for financial reasons and to help care for his brothers. 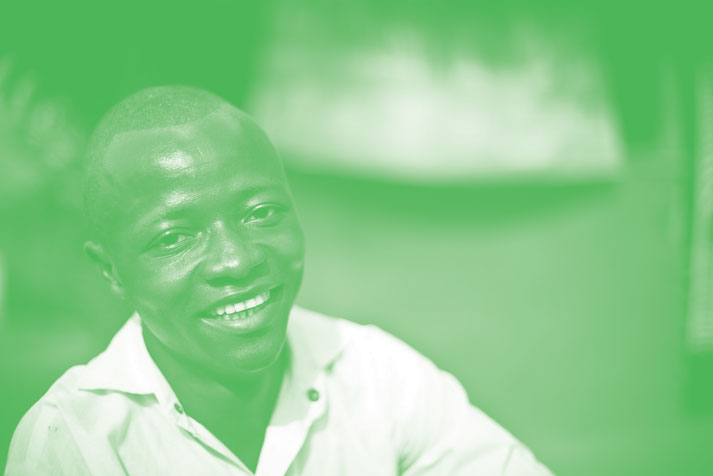 He finally was able to return to school at age 16, when Gary and Jeanne Bergsten (from Nebraska) began sponsoring him. After four years, just short of his 20th birthday, Gonza graduated from seventh grade—first in his class.

Instead of continuing in high school, Gonza asked to go to Elikya (Hope) Center—the Congolese church’s training center for older orphans and widows. He continued to carry the burden of caring for his younger brothers. If he could learn a trade, he would be able to send his brothers to school and help them when they were sick.

At Elikya, Gonza spent nine months learning biblical truths, life skills and the trade of masonry. In Congo, houses are typically made of sticks and mud, but more and more people are making dirt bricks—drying them in the sun and building a more durable home. Thus Gonza’s skills are in high demand.

Today, Gonza is a mason in his home village and served as head mason for his church’s new building.

In a recent message to his sponsors, Gonza wrote:

Dear Parents, hello. I am praying for you days and nights so that God can protect you for the good things you are doing for me. I have finished my training at Elikya Center and am building lots of houses right now. It is helping me a lot and also my brothers because I am paying their school fees out of that money. Thanks for all. — Gonza

To date, 1,743 children have been sponsored through GlobalFingerprints in Congo. This school year, 60 GlobalFingerprints orphans who are over 18 are learning a trade at Elikya Center, as well as discovering more of Jesus. Like Loraine and Gonza, as they realize their value and purpose in God’s eyes, each will have the opportunity to give back to their communities, perhaps even to other children like themselves, who only need a loving home and a helping hand.

Rachel Balia is coordinator both for GlobalFingerprints Congo and for Elikya Center, a training center for older orphans, widows, unwed moms and the disabled. Rachel served with the EFCA in Congo until 1996, when civil war prevented her from returning. Working now with her Congolese brothers and sisters to respond to the needs of orphans has been one of her biggest joys.