A biblical and theological framework
by Dr. David W. Pao 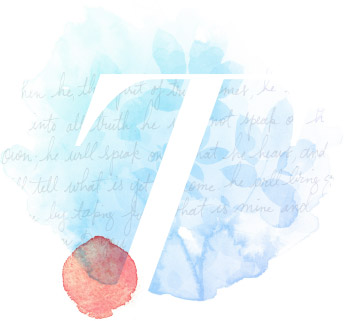 The fact that God speaks lies at the very center of our Christian faith, and His message demands that all creation give heed. If we do not situate this act of hearing within a proper biblical and theological framework, however, seeking a message from God can easily become an attempt to justify our own self-seeking decisions.

Hearers within the plan of God

The biblical story of redemption began with the description of the fall of human beings as they became disobedient to God their Creator (Genesis 3). As a result, “they became futile in their thoughts and their senseless hearts were darkened” (Romans 1:21).1 With a “depraved mind” (Romans 1:28), they are able neither to discern nor respond to the will of God.

The gracious and loving God has, however, begun to reveal Himself to a blessed people who are themselves called to be a blessing to “all the families of the earth” (Genesis 12:3). This revelation climaxed in the unique and final revelation in the person of Jesus Christ, and it is only through Him that someone can know the divine will, because “no one knows the Father except the Son and anyone to whom the Son decides to reveal Him” (Matthew 11:27).

The Word is the foundation upon which all acts of hearing are grounded.

As believers participate in Jesus’ death and resurrection, God “shine(s) in our hearts to give us the light of the glorious knowledge of God in the face of Christ” (2 Corinthians 4:6). In this present age, we need to fix our eyes on the “eternal glory,” the fullness of which remains unseen, “for what can be seen is temporary, but what cannot be seen is eternal” (2 Corinthians 4:18).

Within this salvation-historical framework, the fallibility of human reasoning needs to be underlined. Even for those who have been granted this knowledge of salvation, in the present age, we can only “know in part” (1 Corinthians 13:12). God has, however, given us the written Word, which testifies to the climactic and final revelation found in Jesus.

Any certainty in the act of hearing and knowing can only be anchored on the Scripture that is “inspired by God and useful for teaching, for reproof, for correction, and for training in righteousness” (2 Timothy 3:16).

How does this affect the way we hear from God? God has provided us with the written Word, through which we can enter into a living relationship with God. This Word centers on God’s climactic work in His Son, who is Himself the center of God’s communication with human beings. All voices taken to be originating from God are therefore to be grounded in and mediated through the Word, centered on Christ, and aimed at the sanctification of believers, who are to glorify the Sovereign Lord in aligning their will with His.

Hearing through the Word

This insistence on the centrality of the Word is best reiterated in the Reformation doctrine of sola Scriptura, a doctrine that flows directly from our discussion of God’s plan for humanity presented above:

The doctrine of sola Scriptura reminds us that attempts to hear from God that bypass the gospel of Jesus Christ are idolatrous acts, and such attempts only distract us from the centrality and sufficiency of the gospel. God has provided His people with various means through which the power of the Word can be revealed, but the paradigmatic significance of the Word should be repeatedly affirmed.

A. Role of the Spirit in the illumination of the Word

Working within believers, the Holy Spirit convicts us of our sins (John 16:7-11) and leads us to the truth that is Christ Himself (John 14:6) as He is revealed in the Word (John 17:14-17). When we “heard the word of truth … [we] were marked with the seal of the promised Holy Spirit, who is the down payment of our inheritance, until the redemption of God’s own possession” (Ephesians 1:13-14).

This Spirit points to Scripture that testifies to the past work of Christ as we anticipate the future consummation of God’s work through Christ at the end of times.

For believers seeking to hear from God, the Spirit provides illumination of the Word as we are convicted of our sins and are empowered to live out the gospel of Jesus Christ. The ministry of the Spirit is therefore intimately linked with the power of God’s Word. As Kevin Vanhoozer states: “The Spirit may blow where, but not what, He wills. The Spirit is subordinate to the Word.”3

This illumination is not merely a mental act, since through such illumination we are compelled to follow Christ in all that we do. As we are “taught by the Spirit … we have the mind of Christ” (1 Corinthians 2:13,16) and are therefore able to discern and obey God’s will, which is for us to become holy (1 Thessalonians 4:3). As we are 2,000 years removed from the revealed text, the Spirit continues to guide us to live in light of the Word.

B. Role of the community in faithfulness to the Word

The community of God’s Word has an essential role to play as believers discern God’s guidance. As believers living in this time between the cross and the parousia, we who anticipate the sharing in Christ’s glory (cf. 2 Corinthians 1:6-7) are responsible to remind, admonish and encourage one another to be faithful to the Word (cf. Hebrews 10:25).

Though even the majority voice within the community is not to be identified with God’s own voice, God can and does use His own people to lead individual believers to live faithful lives in light of the Word.

C. Role of prayer in worship through the Word

Through prayers, believers are called to align their wills to God’s as Jesus Himself did in the Garden of Gethsemane: “Yet not what I will, but what you will” (Mark 14:36). Prayer accomplishes many things, one of which is to provide a context through which God can work through believers who are called to submit to the authority of the Word. This is possible when “the Spirit intercedes on behalf of the saints according to God’s will” (Romans 8:27).

To hear from God is to seek to conform to His will while understanding our place in His salvific plan as revealed in His Word: “But you, dear friends, by building yourselves up in your most holy faith, by praying in the Holy Spirit, maintain yourselves in the love of God, while anticipating the mercy of our Lord Jesus Christ that brings eternal life” (Jude 20-21).

With such prayers centered on the truth, we are able to flee from our idols in the worship of the one true God, since “He who prays in spirit and in truth is no longer dependent on created things when honoring the Creator, but praises Him for and in Himself.”5

D. Role of wisdom in the appropriation of the Word

Scripture does not provide explicit direction for every possible decision believers face. Those who argue for the significance of wisdom in discerning God’s will6 rightly recognize the freedom granted to believers to make decisions within the general moral will of God. Through such decision-making processes, believers will grow into mature disciples in our walk in Christ (Colossians 1:28).

This wisdom should not be divorced from the revealed Word, since it is in the meditation of the Word that Christians can gain wisdom from God: “The law of the LORD is perfect and preserves one’s life. The rules set down by the Lord are reliable and impart wisdom to the inexperienced” (Psalm 19:7).

Wisdom should therefore be considered a means through which the revealed Word can be appropriated in every aspect of our lives. The decisions to be made are not to serve our own agendas and well-being, but “whatever you do, do everything for the glory of God” (1 Corinthians 10:31).

E. Role of divine intervention in the fulfillment of the Word

In His own time and through His own means, God can not only speak to and work among His people but also “intervene in power” (Isaiah 30:30).

Believers are to be open to signs of divine intervention, but Scripture does not always encourage the seeking of those signs. Repeated references to “by God’s will” (Romans 15:32; cf. Romans 1:10), “if God wills” (Acts 18:21), “if the Lord is willing” (1 Corinthians 4:19; James 4:15) or “if the Lord allows” (1 Corinthians 16:7) point to the belief that He does continue to intervene in human affairs.

All supernatural experiences need to be subjected to the judgment of the Word, because Satan can be the one working behind “all kinds of miracles and signs and false wonders” (2 Thessalonians 2:9). Even those experiences that come from God should be understood within the salvation-historical framework outlined in the Word: As we live between the cross and the parousia, God continues to work in and through us as He fulfills His promises to His people.

As “signs and wonders” in New Testament times often testified to the gospel message (Acts 14:3; 15:12; Hebrews 2:4), so God’s continued acts among His people also point back to the climax of His redemptive work in Christ while anticipating the ultimate consummation of such work.

Believers are to be open to signs of divine intervention, but Scripture does not always encourage the seeking of those signs.

An example in the Word

The life of the Apostle Paul illustrates these five ways that God speaks to His people through His Word:

In Acts, Luke describes how the Holy Spirit called the church to send Barnabas and Saul as messengers of the gospel message (Acts 13:2). After confirming this call through prayer, the community responded by being obedient to this call (Acts 13:3). Throughout his missionary journeys, Paul used the wisdom granted to him to plan his itinerary. At times God did intervene by prohibiting him to preach in certain areas (e.g., Acts 16:6-7) and by redirecting his itinerary through visions (e.g., 16:10).

Behind these various means lies the wider plan of God that centers on the work of Christ, who Himself called Paul to be “[His] chosen instrument to carry [His] name before Gentiles and kings and the people of Israel” (Acts 9:15).

This plan was firmly grounded in the Word, as Paul fulfilled the promises contained in the words of Isaiah: “I have appointed you to be a light for the Gentiles, to bring salvation to the ends of the earth” (Acts 13:47; cf. Isaiah 42:6; 49:6).

This example serves us well as we seek to hear the voice of God through various means that are grounded in and mediated through the Word.

David W. Pao is professor of New Testament and chair of the New Testament Department at Trinity Evangelical Divinity School in Deerfield, Ill.